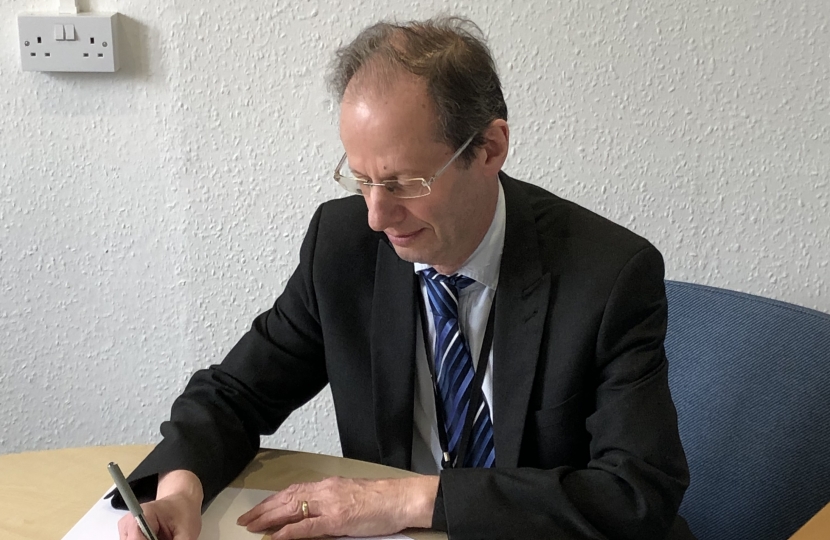 “For my wife Jan and I the first 4 or 5 weeks of the total lockdown were a fairly ‘interesting’ 7 day a week slog, dealing with the wave of referrals pouring in from the Council’s Covid emergency number for the vulnerable ‘shielded’. It has now calmed down considerably, so it’s now time to look at the wider picture.

I note that Matt Hancock, as of 18 July, temporarily paused the daily Covid death toll reporting, on the not entirely unreasonable grounds that the Public Health England methodology behind their publication was manifestly bonkers. As my colleague Cllr Dale Smith put it way back in February, I believe, we really need to know whether somebody dies ‘of Covid’ or ‘with Covid’  (or, now, whether they’ve ever had Covid). PHE’s methodology meant that the Covid recovery rate, in the absence of human immortality, will be zero! A patient (or even an entirely asymptomatic carrier) who has ever tested positive, but emerged, either from self-isolation after being well throughout, or being a bit under the weather with it, or after, on an escalating scale of awfulness, narrowly survived full intubation ventilation in ICU, will forever be counted as a Covid death, whatever the subsequent primary cause of death might be.

No doubt the left (il)liberal broadcast media, i.e. essentially all of it, from Channel 4 on the shameless far left, through the BBC via occasional Maitlis style egregious ranting, ITV with the long winded Mr Peston and an assortment of Sky News moaners, will cry foul and ‘conspiracy’ if the resultant ‘real’ Covid death toll is revised downwards somewhat.

Which leads to another thought. What a ghastly shambles our high level PR has been! Cabinet Ministers and those a little further down the food chain must learn selectively to go aggressive and hostile with some media questioners/interviewers. Instead of the endless grovelling “thank you ever so much for that super question” when asked the frequently implied real question “is the virus all your fault and are you going to resign?” they should let rip! Out of a large field of possibilities, perhaps the recent one ripest for the full treatment was that asked by BBC Breakfast’s presenter Naga Munchetty. In response to her question to Alok Sharma: “what would you consider, (as a result of the Covid crisis) an acceptable level of unemployment?” I think the following would have struck the right note: “Congratulations, you’ve just won the Covid emergency first prize for the most offensively moronic question.” I suppose the reply could have been slightly more nuanced than that – perhaps “I don’t know Naga, perhaps we’ll just have to see what the economics experts say. A pity that economists are a bit like the medical scientists. Get six scientists on a committee and you’ll get seven theories and all of them may well turn out to be wrong, including both the theories of the one who had a change of mind!”

Perhaps this is indeed the time to look at the 7 levels of the ‘hierarchy of scientific evidence’, where, right at the bottom, on level 7, sits the perceived value of conclusions derived from background information and expert opinion arrived at by a committee (SAGE and Ministers who ‘follow the science’ should note perhaps!?)

Now to Council finance matters. Some local authorities are without any shadow of doubt in deep mire as a result of a toxic combination of lockdown direct additional costs incurred and a whole raft of fees, charges and other income streams, drying up almost entirely. Some, like Luton, are caught in a perfect storm. When a large chunk of your income is derived from a leading holiday flights airport, Covid will have created financial mayhem genuinely beyond your reasonable control. On the other hand, where Councils have decided in the past few years that they would really like to play at being commercial property companies, with the carnage on the High Street and the sudden tendency for killing the requirement for office space, they have created a disaster of their own making. Happily Bradford Council haven’t (yet) become major players in this crackpot game, but the situation bears watching (are we sure a £25 million punt on One City Park is a viable runner folks?)

Nonetheless Bradford is in a fairly deep financial hole, but with the Conservative Government’s enormous support it isn’t a bottomless chasm. In addition to the little matter of about £143 million allocated to the District for passing on to eligible businesses, we have been allocated almost £36.5 million in in ‘Section 31’ Emergency grants, plus an as yet undefined significant chunk in respect of the separate scheme designed to significantly compensate the Council for loss of income from fees, charges and sales. Using ‘worst case’ scenario planning, current understanding suggest this element of compensation may amount to something in excess of £15 million. Then there will almost certainly be additional Government support for food distribution initiatives, for example and although ‘worst case ‘ planning suggests there may be a collection fund deficit on Council Tax and Business Rates of some £25 million in this financial year 2020/21, which would normally have to be budgeted for recovery within the following year 2021/22, the Chancellor is allowing a 3 year taper for such deficits. So an £8 million+ hole to fill at one go there, rather than  the full £25 million hit.

Finally, there’s no clear picture as yet how Rishi Sunak’s £1.57 billion pot for the arts will benefit Bradford Council, who do of course run the local theatres/concert halls. Not suggesting that we will get our usual roughly 1% (population pro rata) share of a national pot from this element of generous support, but again we should see significant mitigation of our problem.

Even wholly ignoring the arts funding matter, the controlling Labour Group’s dramatically publicised ‘worst case scenario’ apocalyptic funding hole by financial year end of some £55 million, can be massaged gently down to rather less than £17 million. Undoubtedly still nasty, but with the elements of ‘watch this space’ on Government support still awaited, I think that a little less hyperbole and a little more gratitude for Conservative Government support might be appropriate.”

Following the announcement that the local lockdown would continue for the Shipley constituency as part of the Bradford District, Philip Davies MP had this to say: