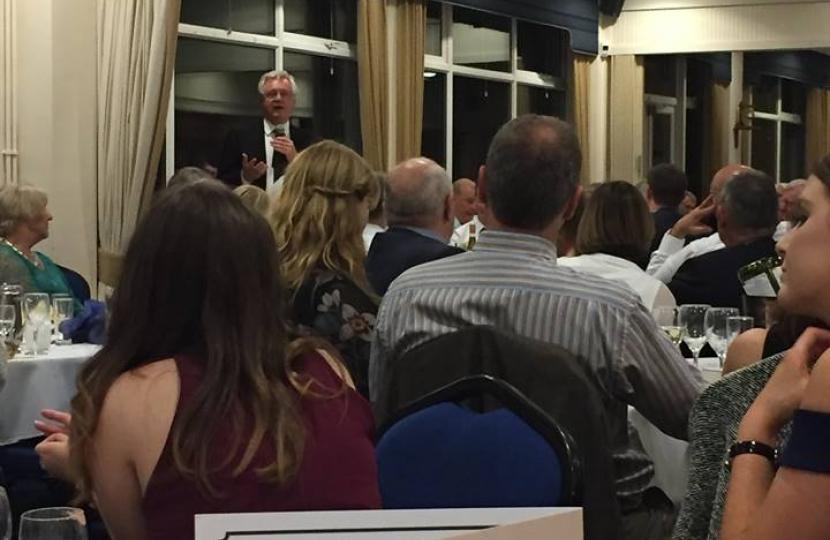 The Shipley Constituency Conservative Association's Annual Dinner was held on Friday the 6th of October 2017, hosted at the Otley Golf Club who also catered the event. The evening began with a Welcome from our Association Chairman, Ann Britton and was then followed by a delicious three course meal.

Philip Davies MP conducted a quick introduction speech for David Davis in which he was saying how much he was admired and respected as a politician. Philip also described David as a keen Brexiteer who is the most capable man to negotiate Britain’s way out of the European Union.

David Davis began his speech by stating his confidence that he will secure the best deal for Britain. He also emphasised that Brexit brought a vast array of opportunities for Britain to prosper in the future, therefore, Brexit should be embraced. David also reassured everyone that even if Britain does not get a deal with the European Union than this is not a bad thing because there are many countries within the Union that rely on Britain and will be keen to create a deal and continue working with Britain. David admitted that the negotiations were daunting but was confident that he, Theresa May, and the Conservatives would deliver a positive deal for Britain. He ended the speech by urging people to remain calm about Brexit and look forward to the opportunities Brexit will bring.

Following the speech, the night concluded with a raffle and an auction, House of Commons cufflinks and House of Lords gin signed by Theresa May and David Davis were the pick of the items. This event was a success for raising money for the Shipley Constituency Conservative Association and gave all those who attended an intriguing insight into the working life of the Secretary of State for Exiting the European Union. It was a fantastic evening and one you could attend in the future. All you need to do is become a member of the Shipley Conservatives. To do this, click on the ‘Join Us’ page on the above toolbar, alternatively call the office on 01274 585830 or email office@shipleyconservatives.org.uk for further information.