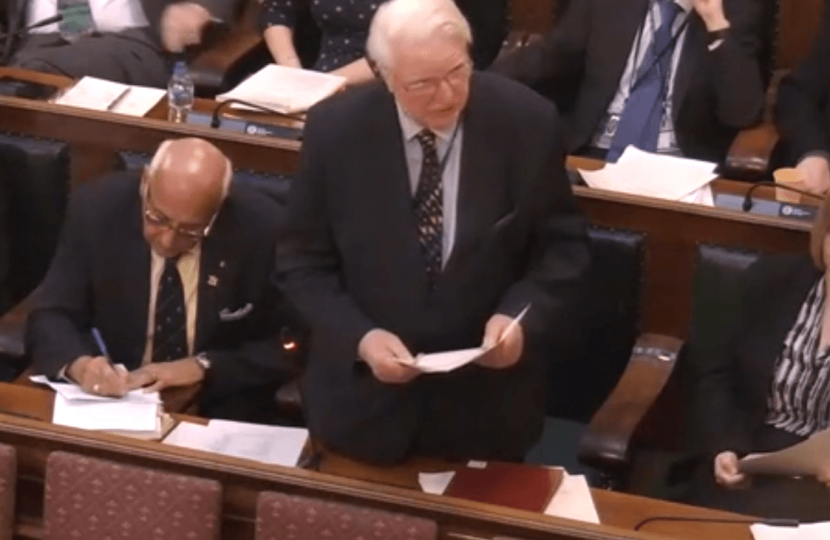 See below an extract from Cllr Dale Smith, who also spoke during the Budget debate.

LORD MAYOR – fellow councillors - Let me re-emphasise that although Cllr John Pennington has to be away from Bradford today you may be quite certain that even now as we debate he is Batting for Bradford – OUR BRILLIANT BRADFORD – YOURS and MINE.

Our amendment for the budget is based upon principles, reality and value for money

We know times are hard and we have already heard much from Labour about the pressures on the finances but how memories fade and people forget the impact the past had on our future.

Labour in Bradford choose to totally ignore the part played at the start of the financial crash by Gordon Brown. Northern Rock came after years of a Labour government when they spent money like water – OUR money as tax payers NOT their money they had earned  - Remember when in September 2007 people queued around the block desperate to withdraw their money before the bank closed. It was eventually nationalised, but effectively bust!

Thousands lost all their money, Gordon Brown having dithered and dallied before deciding, through the Bank of England, to guarantee all deposits in UK banks up to £85,000.

We are still recovering from that debacle.

Remember too Tony Blair's mantra   - Education, Education, Education so that when in 2000 Labour lost control of Bradford Council we found to our surprise and cost an intervention imposed upon it by Estelle Morris MP, the then Labour Secretary of State.

Another debacle we are still struggling to recover from!

There is though a ray of sunshine on the horizon. Today is has been announced that the Government finances were in surplus by £14.9bn last month, the largest January surplus since records began in 1993. Perhaps the forthcoming Comprehensive Spending Review might lead to a relaxation and give a margin of breathing space.

Of course we all know that we cannot please all of the people all of the time and to build a BUDGET it is rather like putting a jig-saw into place except that the pieces keep shape-changing - and pieces appear and disappear! Do not forget that we still have to come the Adult Social Care Green paper to say nothing about BREXIT! and doubtless more besides.

We can though base recovery and progress upon fundamental principles and let me make it quite clear at the outset, that despite what you may read in the press and hear on the Television

CONSE DO CARE FOR THE MOST VULNERABLE.

We do recognise the need to provide an extra 6.5 million pounds to try to secure the remedy to a poor OFSTED and we wish the director and her successor the very best of success. This Council is the Corporate parent for the vulnerable children of Bradford. They deserve a better service than we have provided recently. We obviously welcome the 6.5 million £ extra funding for Children’s Social Services but are disappointed that it took an adverse OFTSED report to make this happen. We had repeatedly warned that social workers and foster parents were underfunded. The OFSTED inspection recognised that much improvement is necessary. Bradford needs its young and growing population to be work-ready and skilled.

Education is the pathway to empathising with those less fortunate whilst at the same time enabling the less advantaged to grow and prosper. Education helps build a cohesive society.

Everyone should be able to live a comfortable, secure and safe life in today’s Bradford BUT – people and communities themselves have a major role to play in shaping this pathway.

It is all about People accepting responsibilities – NOT just demanding RIGHTS.

Certainly the key to education is Early Intervention and the potential damage to Childrens Social services, Childrens Centres and Early Years will have a knock on effect in later years –

Catch them young to put them on an upward trajectory.